Thermodynamical characterization of protein-water interactions in aqueous solution. — Proteins are dissolved by water through hydrogen bonds, long-range Coulomb forces, and hydrophobic forces. To shed light on the effect of these forces, we performed wide-line 1H NMR measurements in aqueous solutions of thymosin-β4 (Tβ4), stabilin C-terminal domain (CTD), and their 1:1 complex. Based on a thermodynamic approach, we characterized quantitavely the potential barriers which hinder the motion of water molecules in interaction with the protein.

We suggest that the interaction sites of stabilin CTD belonging to the rather hydrophilic parts of the solvent-accessible surface are involved in the interactions holding the complex together. Exceptions are the lowest-energy potential barriers or interaction centers of thymosin-β4, which are absent in the complex. This can be interpreted as they are not present in the complex and they are engaged in making bonds necessary for complex formation. Stabilin CTD lacks such low-energy potential barriers. The constant amount of mobile water per amino acid residue vs. potential barrier data (Fig. 1) at low energies are attributed to ordered protein structural patterns. 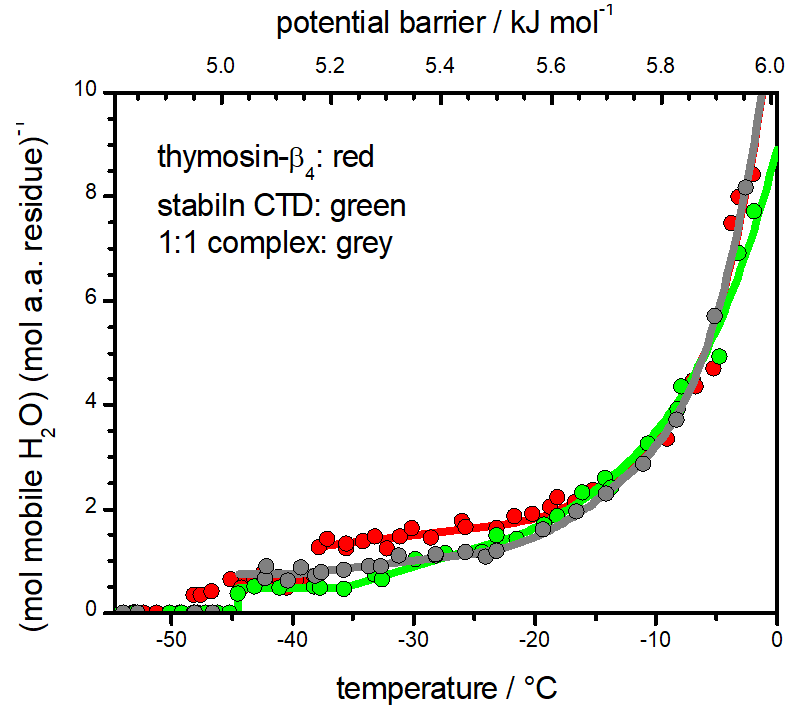 Figure 1. Melting diagram, i.e. the number of mobile hydration water molecules per amino acid residue as a function of temperature (lower abscissa) and of the potential barrier hindering the motion of water molecules (upper abscissa).

The ratio of heterogeneous binding interface derived from the actual energy scale of the motions or interactions of water molecules showed that the individual proteins thymosin-β4, stabilin CTD and also their complex have highly heterogeneous bonds with the mobile water molecules. The dynamical characterization by the heterogeneity ratio values of the binding interface led to the conclusion that the studied proteins have ordered components ranging to 10% to 20%. Helical structures are considered as ordered parts seen by wide-line NMR.

The comparison of the amount of mobile water per amino acid residue values for the proteins in the potential barrier independent section (Fig. 1) suggests that the complex has the most open structure and that stabilin CTD is the most compact. The continuous distribution of potential barriers found above the section of constant amount of mobile water is characteristic to disordered proteins or protein regions. The protein-water interactions, which are activated closer to 0 °C, hydrate more pronouncedly hydrophilic parts of the protein surface. It can be suggested that they are involved in the interactions holding the complex together. Approximately 40% of the water bonding sites of free thymosin-β4 gets involved in the bonds holding the protein complex together. The interaction centers of thymosin-β4, which form the complex can be the electrostatic interactions by which thymosin-β4 binding to stabilin CTD is stabilized. A small part of the protein-water interaction sites occupied by mobile water molecules bound to stabilin CTD and experiencing potential barriers higher than the start of the quadratic part of the melting diagram disappear for the complex. It can be suggested that these interaction sites are involved in the interactions holding the complex together.

The general picture of the melting diagrams shows that thymosin-β4 and stabilin CTD are disordered both in their free and bound states. The ratios of heterogeneity to homogeneity of these proteins and their complex are close to 1, indicating again that they are intrinsically disordered proteins.

Intrinsically disordered p53 transactivation domain and its helically pre-structured segment. — The strengths of the water-protein interactions for intrinsically disordered proteins (IDPs) vary in a narrow range, and are nearer to the bulk-phase water-water interactions than to that for globular proteins (GPs, e.g. bovine serum albumin, BSA). The “surface” of IDPs is more open to the water, and the amount of the bound water molecules involved is much greater than for GPs. Wide-line 1H NMR intensity and differential scanning calorimetry (DSC) measurements were carried out on the intrinsically disordered 73-residue full transactivation domain (TAD) of the p53 tumor suppressor protein and two peptides: one a wild type p53 TAD peptide with a helix pre-structuring property, and a mutant peptide with a disabled helix-forming propensity. The number of the interacting protein-water connections were quantified. The wild-type p53 TAD has a highly disordered structure as compared to BSA, a reference GP. We found the degree of disorder (being less structured) to increase as BSA < wild type full p53 TAD < wild type p53 TAD helix peptide < mutant p53 TAD peptide. The DSC measurements show the interactions of the proteins with the other solutes, especially with sodium and chloride ions. The full p53 TAD and the peptides bind a considerably greater amount of NaCl than the globular BSA. Both methods, wide-line 1H-NMR and DSC, are not only capable of distinguishing IDPs against GPs, but are also able to differentiate two structural states of IDPs in terms of their interactions with water molecules or other chemical entities, such as salt ions (Fig. 1).