Oscillating electrochemical reactions. — Samples containing alternating Co-rich and Mn-B-O layers were prepared by oscillating electrochemical reaction in collaboration with the Institute of Physical Chemistry of the Bulgarian Academy of Sciences. The preliminary cyclic voltammetric study of the solution containing CoSO4, MnSO4 and H3BO3 revealed that the manganese-containing layer is formed by a precipitation-like process due to the alkalination of the cathode vicinity during the hydrogen evolution.

Figure 1. (a) Typical current oscillations obtained and (b) the fast Fourier transform of an 80-second-long section of the current–time function that comprises the data shown in Fig.1(a).

The stability of the oscillation was characterized by the ratio of the two characteristic frequency maxima and the full width at the half maxima of the peak in the fast Fourier spectra. It can be seen in Fig. 2 that the current oscillation does not only prevail for a long time but it is also stabilized, as the decrease in the width of the frequency peaks in time indicates. 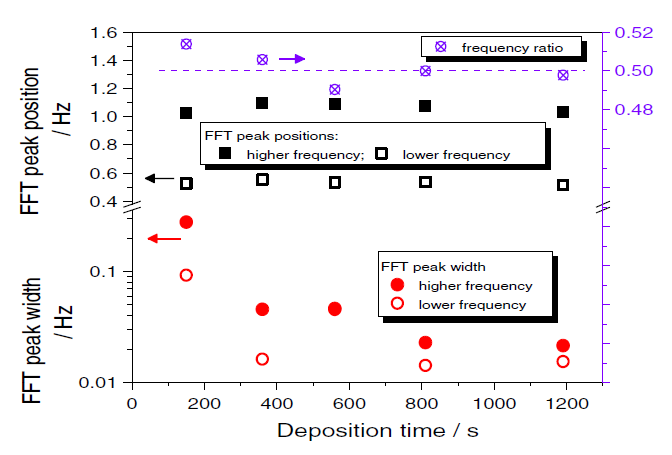 Figure 2. Key parameters of the stability of the electrochemical oscillation.

Magnetism and electronic struc­ture of Ni-metalloid amorphous alloys. — The paramagnetic (PM) to ferromagnetic (FM) transition has been previously investigated on numerous (Ni100‑xFex)‑MD alloys upon the introduction of Fe where MD can represent a combination of various metalloid elements (P, B, Al, Si), while keeping the metal/metalloid ratio constant. Adding a sufficient amount of Fe to a Pauli PM Ni‑MD alloy matrix first induces a spin-glass (SG) state at low temperatures which goes over to a PM state at higher temperatures. Beyond a critical Fe content, xc, the SG state transforms to a FM state upon increasing the temperature. By plotting the characteristic transition temperatures as a function of the Fe content, a magnetic phase diagram (Fig. 3) can be constructed for each Ni-Fe-MD system which has a multicritical point (MCP) at xc. It has been now shown that by using the reported magnetic phase diagrams of various Ni‑Fe‑MD alloy systems, the critical Fe content, xc, for the onset of ferromagnetic order scales inversely with the density of states at the Fermi level, N(EF), of the parent Ni-MD matrix. This means that the higher the N(EF), the lower the critical Fe content to induce ferromagnetism in the Ni-MD matrix. This is because a higher N(EF) leads to a higher Stoner enhancement factor, S, which characterizes the tendency of the matrix to become ferromagnetic. If S is higher for a Ni-MD matrix, a smaller amount of Fe atoms is able to develop an exchange interaction with each other and with the Ni atoms to drive the system to an FM state. Along this line, the critical Fe concentration was found to scale also with S, and the same was found to hold also for the multicritical temperature, TMCP. 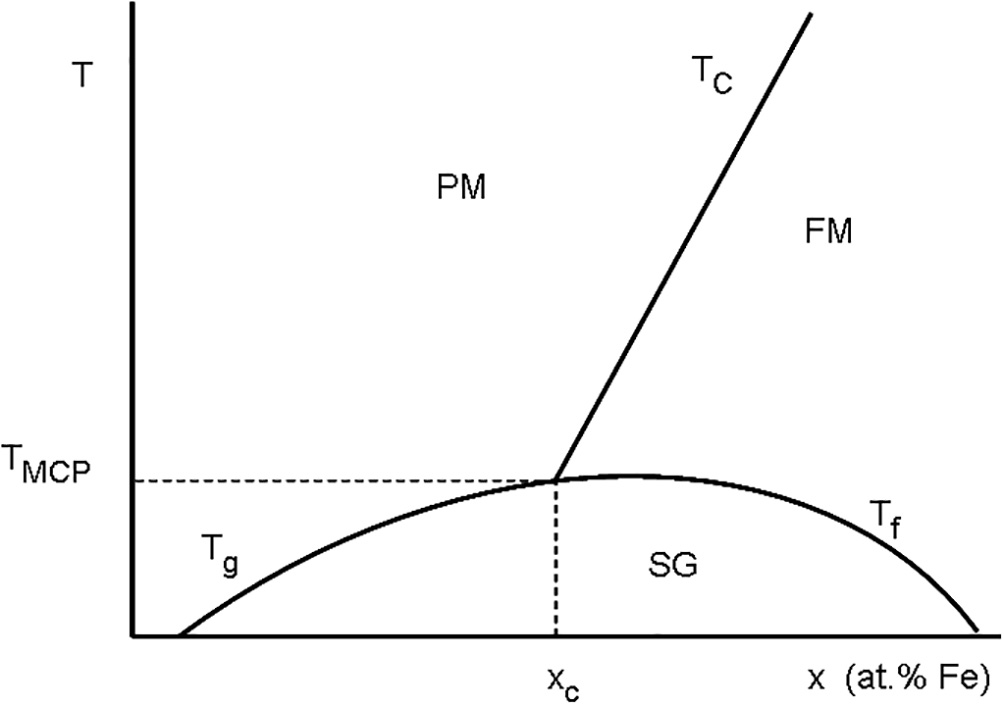 Corrosion studies. — Long-term corrosion tests were performed for welded 18Ni-10Cr austenitic stainless steel pipes. The model experiment simulated the impact of the differential ventilation conditions with a large cathode/anode surface area ratio and the enhanced corrosion sensitivity of the welded area. The schematic picture of the experimental setup is shown in Fig. 4. The 46-day-long experiment revealed that under the differential ventilation conditions, pitting corrosion can occur also at the time scale of months on a material that is designed to be in service for decades. It was also found that the solute in the corrosion medium (a boric acid solution that is analogous to some bath used in the nuclear industry) cannot prevent the occurrence of microbiologically induced corrosion processes since the reproduction of bacteria and their biofilm-forming activity is not blocked. 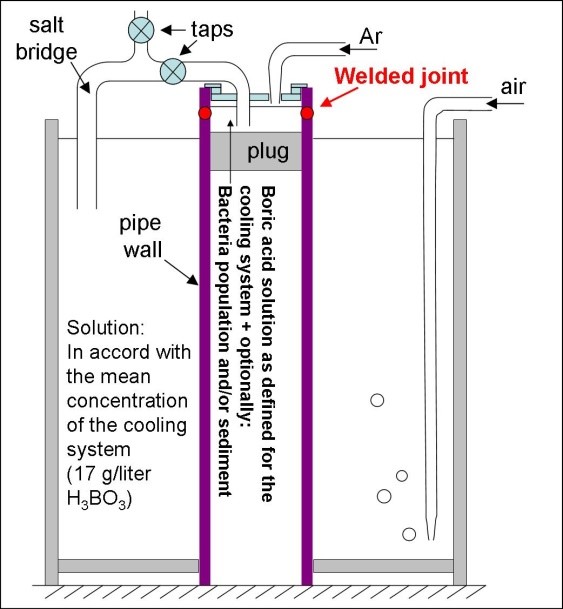 Figure 4. Setup of the corrosion test device with the application of differential ventilation conditions and a high cathode/anode surface area ratio. The height of the device was 1 meter.

Electrodeposited nanowires. — Ni-Co/Cu multilayered nanowires were fabricated by template-assisted nanowire growth in anodized aluminium oxid (AAO) membrane from an optimized aqueous electrolyte by using two-pulse plating. The segmented magnetic/non-magnetic nanowire structure was achieved during growth along the length of the nanowires. The electrodeposition parameters were set to obtain equal thicknesses of both kinds of layer with a repetition period of 10 nm. Structural characterization of the nanowires was carried out using SEM, TEM, HRTEM, SAED and EELS techniques in collaboration with the Universitat Autònoma de Barcelona, Spain.

These techniques yielded results confirming the multilayered structure of the nanowires. Figure 1 shows the TEM image of a single multilayered Ni-Co/Cu nanowire which was released from the AAO membrane by dissolving the template. An alternating dark and light layering sequence can be observed at the edges of the wire, both layer types having an approximate thickness of 5 nm. The diffraction pattern was measured by using SAED (see inset in Fig. 1) from the red rectangular area of the nanowire. After indexing the pattern, we found that both the magnetic and non-magnetic layers have an fcc structure. Furthermore, from the magnetic hysteresis loops measured on the nanowire array within the template in a VSM, with the magnetic field being parallel or perpendicular to the wire growth direction, we found a coercivity value of 118 Oe or 89 Oe, respectively. 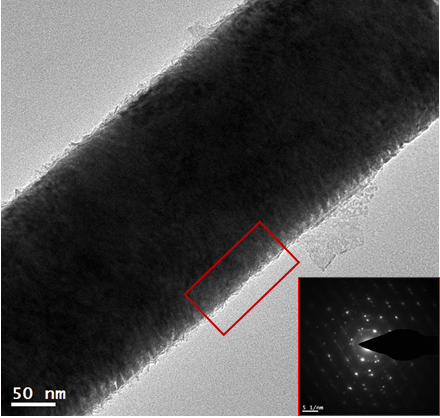 Thermoelectric properties of electrodeposited multilayered nanowires. — Thermoelectric (TE) measurements have been performed on single electrodeposited nanowire samples exhibiting either the giant or the anisotropic magnetoresistance effect (GMR and AMR, respectively). The temperature-dependent (50–300 K) and magnetic field-dependent (up to 1 T) TE power factor (PF) has been determined for several Co-Ni alloy nanowires with varying Co:Ni ratios as well as for Co-Ni/Cu multilayered nanowires with various Cu layer thicknesses, which were all synthesized via a template-assisted electrodeposition process. A systematic investigation of the resistivity as well as the Seebeck coefficient was performed for both types of nanowire samples. The TE PF was found to increase by up to 13.1 % for AMR Co-Ni alloy nanowires and by up to 52 % for GMR Co-Ni/Cu samples in an external applied magnetic field. The magnetic nanowires exhibit TE PFs that are of the same order of magnitude as TE PFs of Bi-Sb-Se-Te-based thermoelectric materials. This effect offers an opportunity to adjust the TE power output to changing loads by external magnetic fields. (These results were achieved in an international cooperation with five European partner institutes.)

Coercivity of nanoscale electrodeposited cobalt layers. — The magnetic properties and the magnetoresistance behavior were investigated for electrodeposited nanoscale Co films, Co/Cu/Co sandwiches and Co/Cu multilayers with individual Co layer thicknesses ranging from 1 nm to 20 nm. The measured saturation magnetization values supported reasonably the validity of the nominal layer thicknesses. All three types of layered structure exhibited anisotropic magnetoresistance for thick magnetic layers whereas the Co/Cu/Co sandwiches and Co/Cu multilayers with thinner magnetic layers exhibited giant magnetoresistance (GMR), the GMR magnitude being the largest for the thinnest Co layers. The decreasing values of the relative remanence and the coercive field when reducing the Co layer thickness down to below about 3 nm indicated the presence of superparamagnetic (SPM) regions in the magnetic layers which could be more firmly evidenced for these samples by a decomposition of the magnetoresistance vs. field curves into a ferromagnetic and an SPM contribution. For thicker magnetic layers, the dependence of the coercivity (Hc) on magnetic layer thickness (d) could be described for each of the layered structure types by the usual equation Hc = Hco + a/dn with an exponent around n = 1. The common value of n suggests a similar mechanism for the magnetization reversal by domain wall motion in all three structure types and hints, at the same time, at the lack of coupling between magnetic layers in the Co/Cu/Co sandwiches and Co/Cu multilayers.

Composition depth profile measurements on electrodeposited Ni-Cu/Cu multilayers. — The composition depth profile of electrodeposited Ni-Cu/Cu multilayers has been studied with Glow Discharge – Time-of-Flight Mass Spectrometry (GD-ToFMS) technique, a relatively new method that was not used before to investigate electrodeposited materials. The GD-ToFMS technique proved to be suitable to detect the layer struc­ture and also to distinguish Ni layers with various Cu contents (8-50 at.%; see Fig. 2). 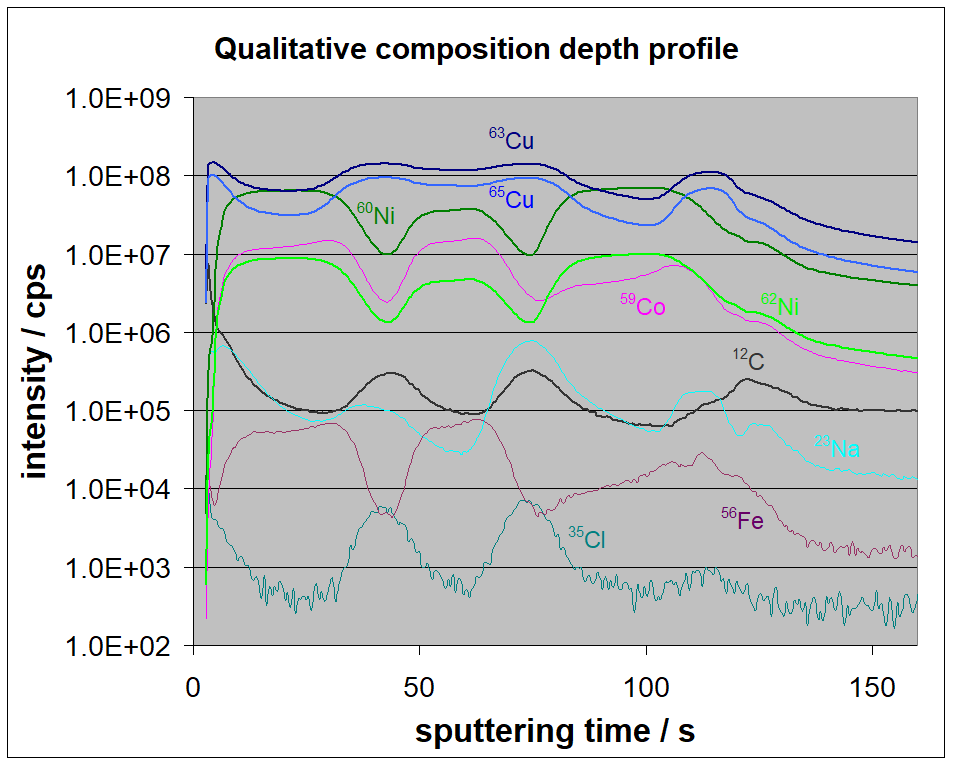 It was found that some impurities (especially C but also Na and Cl, all originating from the components of the solution) accumulate in the Cu layer. The presence of the impurities in the Cu layer may cause a high resistivity and can yield an explanation why electrodeposited multilayers obtained from citrate baths have inferior magnetoresistance properties as opposed to nominally identical multilayers obtained from bath with no organic components. (This study was performed in co-operation with the University of Oviedo, Spain.)