Neutron instrumentation development. — Members of the group actively participated in the detailed design work of two instruments for the European Spallation Source (ESS) in Lund, Sweden: BIFROST indirect neutron spectrometer and NMX macromolecular single-crystal diffractometer. Both are new type instruments, the first ones in their class. The final design of the neutron optics systems of the instruments (neutron guide systems, choppers and detectors) are finalized by means of analytical calculations completed at our department. Researchers of the Neutron Spectroscopy Department investigated the robustness of the neutron guide system against misalignment and waviness of the neutron mirrors and the movement of the floor, features indispensable both in the optimization of the guide system and in the design of radiological shielding.

In the frame of the EU-H2020 BrightnESS project, researchers of the group have performed the optimal principial design of the ESS Test Beamline, the first equipment to receive neutrons and produce results at the ESS facility currently being built at Lund. 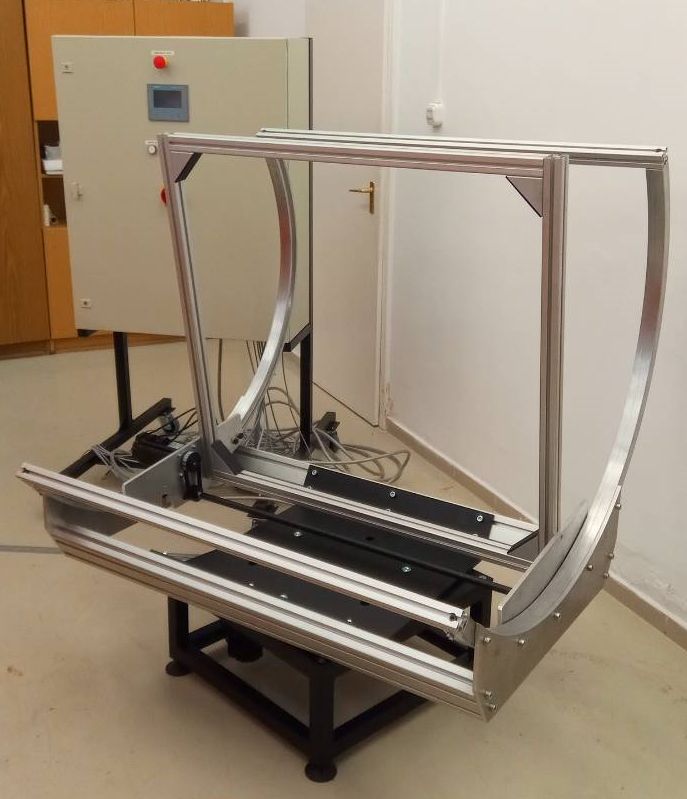 We have developed, successfully tested at the Budapest Research Reactor and applied during an experiment series at the JEEPII reactor of IFE Kjeller, Norway a compact, mobile equipment for energy-sensitive imaging of neutron sources. The key components are the mask with pinhole and chopper unit as well as a four-layer, double-readout solid boron converter neutron detector. Neutron adsorber materials, system geometry and parameters have been optimized to accommodate the high count rate and good resolution specific for the intended application.

A further development is the equipment for positioning large samples at the time-of-flight (TOF) diffractometer (Fig. 1), a sample environment equipment indispensable for fulfillment of archeometry tasks in the frame of the EU-H2020 Iperion project.

We coordinated the instrumental part of the Hungarian In-Kind contribution to the ESS, including design and production of neutron optical elements and shielding as well as engineer and physicist secondment provisions.

Neutron holography. — In 2017, we continued the research started earlier on the topic of magnetic holography. Neutrons possess magnetic moment, thus they interact with the magnetic moments of the atoms in the sample. The latest investigations revealed the possibility to use this interaction to measure the local magnetic structure around selected atoms in the sample. We described the magnetic hologram previously and showed that the radial component of the atomic magnetic moments can be obtained by applying the Helmholtz-Kirchoff integral transformation to holograms measured in a special experimental arrangement. In 2017, we found a correlation method which can be used to determine the three components of the magnetization vectors. The optimal experimental parameters (neutron spin direction, neutron wavelength and required statistics) were obtained by model calculations (Fig. 2). 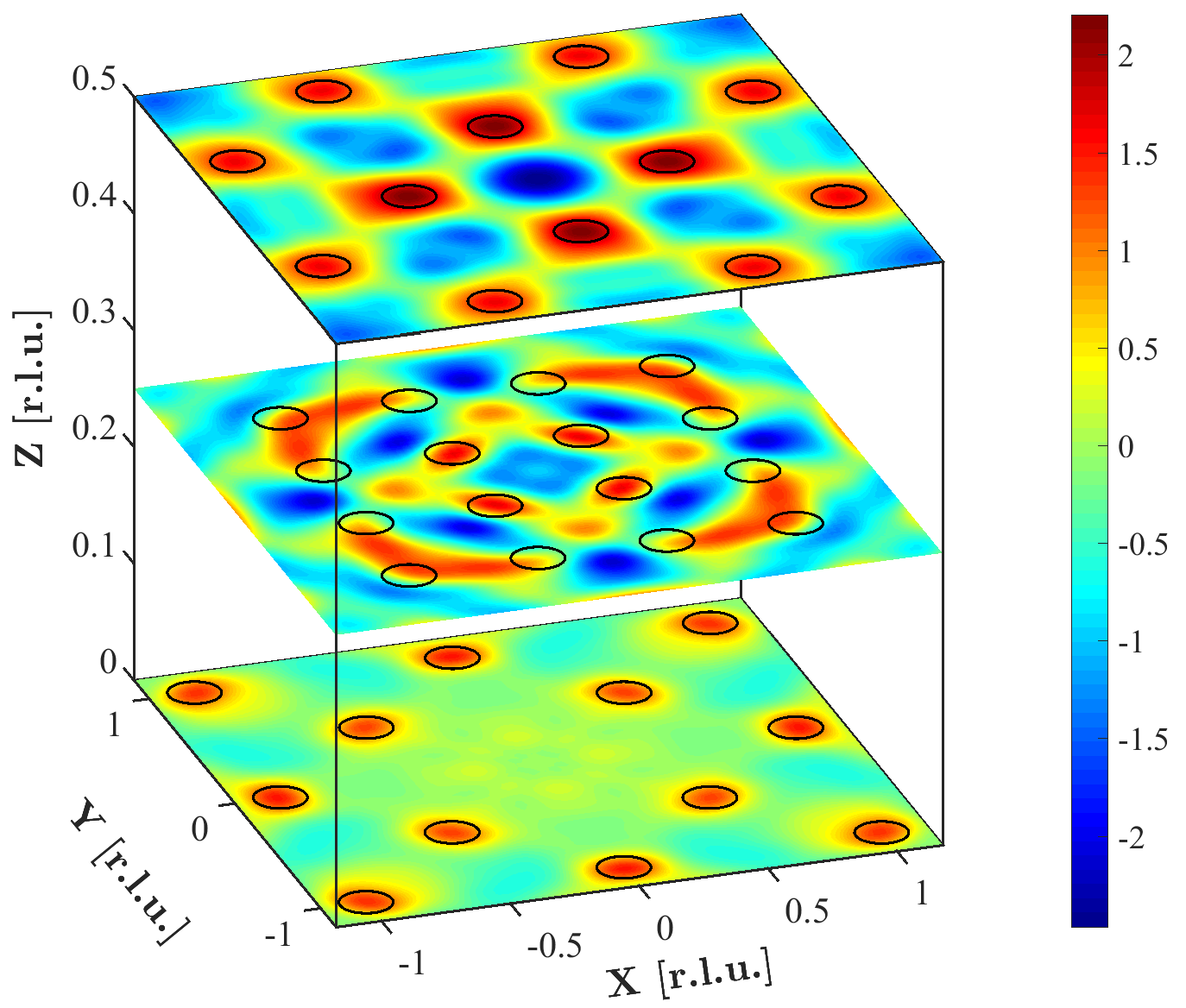 Figure 2. The z-component of the magnetic mo­ments of Cu atoms in CuCr2O4, ob­tained by applying the proposed cor­relation method on the simulated magnetic holo­gram.

Structural investigation of hybrid silica gels. — The similarities and the differences on the physicochemical characteristics of the organic–inorganic hybrid silica gels derived from two-vinyl substituted (Vinyl – triacetoxy / - triethoxy silica (VTAS/VTES)) precursors were studied. NaF and NH4F catalysts were applied to promote the gelification. For both silica precursors the use of NH4F catalysts resulted in higher specific surface area. Using VTES, higher degree of vinyl substitution could be obtained, but the silica gel specific surface areas are lower compared to the corresponding samples obtained with VTAS. The increasing quantity of the vinyl substituents causes a decrease in primary particle size, pore number and sizes, but an increasing hydrophobicity no matter if VTAS of VTES were used. Further investigation will be made to determine how structural modification of the silica hybrid silica support will influence the activity of immobilized guest molecules (porphyrins, drug or enzymes).

An international symposium was organized dedicated to the memory of our passed colleague, László Cser, in the frame of the yearly meeting of the International Scientific Advisory Committee of the Budapest Research Centre. Co-workers, friends, colleagues, former and actual PhD students held lectures to honor his life-long scientific activity.

Neutron instrumentation development. — Members of the group accomplished the development of an energy-selective neutron imaging set-up for the investigation of the cold neutron moderator and beam extraction optics of the Budapest Research Reactor in the frame of the BrightnESS Horizon2020 project. This implied removal of a guide section, development of a dedicated chopper, detector and enforcement of shielding. The experience thus gained is employed in the design of a similar test beamline at ESS. In the frame of the same project, a multiblade solid boron converter neutron detector has been developed at ESS and thoroughly tested for efficiency and resolution on a cold neutron beamline at BNC.

The researchers of the Neutron Spectroscopy Department take part in the design of the neutron guide system of the macromolecular time-of-flight neutron diffractometer (NMX) going to be built at the European Spallation Source (ESS) in Lund, Sweden. The NMX will be the first TOF protein neutron diffractometer in the world. The source-sample distance is 157.5 m, the maximal beam size is 5 mm and the maximal needed divergence is 0.4 degree. The original guide system of NMX was simple, it had a short curved part and a straight section till the sample. Due to the decrease of the source size, this guide did not provide enough neutrons at the sample. The main difficulties of the design are the robustness of the guide system against floor movement, alignment accuracy and waviness of the mirrors, the need for decreasing the shielding cost, i.e., decreasing the number of neutrons within the guide while the intensity at the sample does not decrease, and that the neutron guide shall go out of line of sight within the first 24.5 m to avoid the fast neutrons going through the wall of the biological shielding. To solve these problems, we developed new methods for calculation of the robustness. We designed a new kind of guide system which produces a wide beam with low divergency within a short length meanwhile it goes out of the line of sight. The beam at the bunker wall has 0.1 degree divergence and its size is 4.5 cm in each direction. This beam is transported by a straight guide until the focusing part. We chose a parabolic focusing which focus the parallel beam to the sample which is also not used in the case of neutrons. This focusing solution increases the guide robustness against angular misalignment and waviness. The new solution increased the number of neutrons reaching the sample both because of the increased robustness and due to the better optimization possibilities meanwhile the total intensity in the guide decreased by one and a half order of magnitude, thus the needed shielding size decreased by a factor of two. The final decision on the guide system and also the publication of the results will be in 2017.

Neutron holography. — Research on the methodology and applications of atomic resolution neutron holography has been continued. The local structure of a Sn single crystal with Cd impurities was reconstructed and the distortions of the crystal structure around the impurity atom was discussed. It was found that the effect of the different interatomic potentials around the impurity atoms has to be included beside the Friedel oscillation of the conduction electrons to fit the model to the measured distortions. For the first time, 3D displacements of atoms were measured showing the tendency of the local structure changing to the white-tin phase stable at lower temperatures

Structural investigation of hybrid silica gels. — Alkyl- and aryl-substituted silica gels were synthesized and characterized using complementary physicochemical methods. The silica host materials are designed to be proper host materials, for biomolecules or organic dyes, especially enzymes or porphyrins. The influence of the type and quantity of organic moiety upon the silica support physicochemical properties were studied and correlated with the optical emission property of the in situ entrapped metalloporphyrin. In every case, the samples with substituted silica support yielded higher optical emission of the porphyrin, compared to the unsubstituted case.