On 1. January 2020 the department left to become part of the Energy Research Centre.

Staff of the Department

Neutron scattering is a powerful tool for the investigation of microscopic properties of solids, liquids, soft materials, biological objects etc. - condensed matter, in general as well as for non-destructive probing of bulk objects in materials testing and engineering studies. In the neutron beam experiments, using elastic and inelastic scattering phenomena, micro- and mezoscopic structural properties as well as interaction behaviour of condensed matter can be probed with high precision.

The neutron beam lines of the Budapest Research Reactor (BRR) serve basically to perform neutron scattering investigations. After a full scale reconstruction and upgrading the regular operation of BRR at 10 MW power was started in 1993. When the reactor was recommissioned, the Budapest Neutron Centre (BNC) was organised as an association of the neutron research based laboratories of three institutes on the site of the Central Research Institute for Physics (KFKI). The main field of activity at BNC is condensed matter research performed basically by the Neutron Physics Department of SZFKI. The 7 staff scientists and some 6 temporary employees operate various experimental stations.

A small angle scattering (SANS) instrument and a triple axis spectrometer (TAS) both installed on neutron guides, are in current use. Another TAS instrument and a 4-circle materials test diffractometer are being installed on thermal neutron beams. A new reflectometer was recently installed on a neutron guide, we are sharing the construction and utilisation of this instrument. On one hand, we operate the above experimental stations, on the other hand we provide services for external users to perform experiments and exploit the obtained results [1]. For example in 1997 nearly 50 experiments were completed by the local staff and in collaboration with national or foreign users coming from university, industrial or other research laboratories. Our research programme and recent results cover, basically, three fields of materials and in the followings a few examples of this research activity are listed. 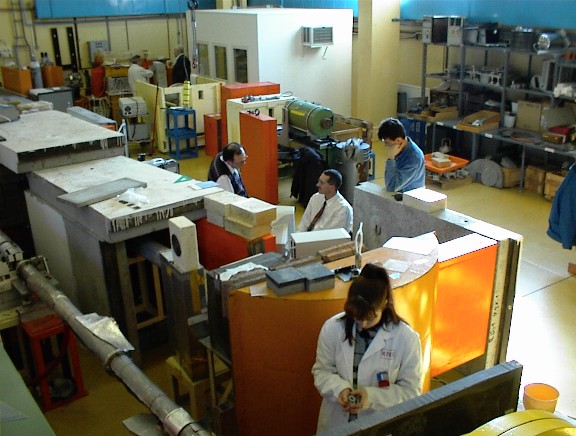 The neutron guide hall of the Cold Neutron Research Facility of the Budapest Neutron Centre with partial view of some neutron scattering instruments, such as the small angle scattering spectrometer, vertical surface reflectometer and the instrument development test facility.

Phase transitions in aqueous solutions. Water is the most important solvent in our life. It plays an essential role in the biological as well as in many chemical (e.g. industrial ) processes. The structure of the aqueous solutions depends on the interaction (Coulomb forces and the so called hydrophobic effect) between the water and solute molecules [2].

In ionic aqueous solutions the Coulomb-interaction between the ions and counterions rules over the structure of the solution. An example of this study is the small angle neutron scattering of aqueous solution of iron (II)-perchlorate quenched to liquid nitrogen temperature. The measurements prove the presence of definite inhomogeneities with size of 20 - 30 nm. By elevating the temperature to about -90 oC these aggregates disappear and at further increase of temperature the SANS pattern recovers again. Approaching to room temperature this effect suddenly disappears. It was established that the nature of these inhomogeneities is connected with the presence of iron-perchlorate reach regions. Moreover, we succeeded in discovering a collective effect in this system, manifested in new phase transitions from a disordered quenched to crystalline state with an intermediate re-entrant amorphous phase.

Another system can be created by dissolving in water amphiphilic molecules - typically consisting of a charged head groups and of an hydrocarbon chain attached to this head groups. One end of such a molecule behaves like an ionic solute, while the other part, the hydrocarbon chain , shows hydrophobic property. Surfactant molecules - forming a subgroup of amphiphils - dissolved in water over a certain critical concentration can form of various types of aggregates generally called micelles. Again by small angle neutron scattering it was shown that the aggregation number is connected with the length of the hydrocarbon chain also by a power law. The aggregation number in the mixed surfactant systems lies between the aggregation numbers of the two single component constituent systems.

Soft Materials. Polymer gels are excellent model objects for study of water transport in complex systems to be important for molecular biology. Our small angle scattering experiments show that the structure of a gel can be considered as a complex network composed by high molecular cross links connected by polymer chains with density-density correlation over the distances ~ 50 nm. Inelastic scattering reveals the diffusion behaviour e.g. a molecule's random walking motion in pure water. The interaction of water molecules with charged polymer chains are proven to be stronger at higher polymer concentrations and it can be interpreted as a first part of an oscillatory behaviour of the diffusion.

Liquid crystal (LC) composite systems attract increasing interest due to their potential application for flat panel displays. In the majority of the composites liquid crystals are dispersed in a polymer matrix, or small amount of polymers is dispersed in continuous LC matrices (LC-Polymer/Gel Systems). Inorganic systems were also intensively studied lately, e.g. when liquid crystals are embedded in continuous, porous aerogels, or small amount of silica particles are filled in nematic LC. Our SANS study revealed the orientational stabilisation of the smectic structure by non-mesogenic polymer networks dispersed in a liquid crystal matrix [3]. In our recent experiment hydrophobic silica particles were dispersed in liquid crystal 8CB. The Bragg-reflections from smectic layers show that the alignment of the layers is perfect if the system is cooled down in a magnetic field. After annealing without magnetic field and cooling down to smectic A phase, the previous alignment of the liquid crystal recovers. The effect of temperature and the silica particle concentration dependence has been measured by recording the diffraction pattern from smectic layers.

Metallic and composite systems. An example of industrial application was the investigation of morphology of potassium bubbles in a series of doped Tungsten wires. SANS experiments revealed that the shape of oriented ellipsoid particles - potassium bubbles - can be directly observed on the isointensity contour map measured by two-dimensional position sensitive detector. Samples of W wire, used as raw material for lamp filaments, after the wire drawing show strong anisotropy persisting to a smaller extent in samples after intermediate heat treatment and vanishing in the completely annealed samples. The results were interpreted in terms of a simple model with mixture of ellipsoid shaped and spherical dispersoid potassium particles.

The importance and ability of neutron scattering in industrial defectoscopy is illustrated by the example below. We have investigated aluminium based composite turbine blades of a helicopter engine. SANS patterns reveal well defined structure characterising both the size and distance between the fibres embedded in the bulk aluminium. Marked differences can be observed in the nano-texture of an intact turbine blade and a defected one. Neutron diffraction reveals the usual texture of the bulk aluminium, which is in correlation with the previously observed nano-texture patterns. Furthermore, the shift of the centre of the diffraction peaks in the case of a broken blade corresponds to residual internal stresses of the order of ~250 Mpa, which is a value characterising the plastic deformation, i.e. beyond the limit for normal use. This allows to detect either hidden imperfections of construction elements or, after an accident, to carry out diagnostics disclosing the origin of the accident.